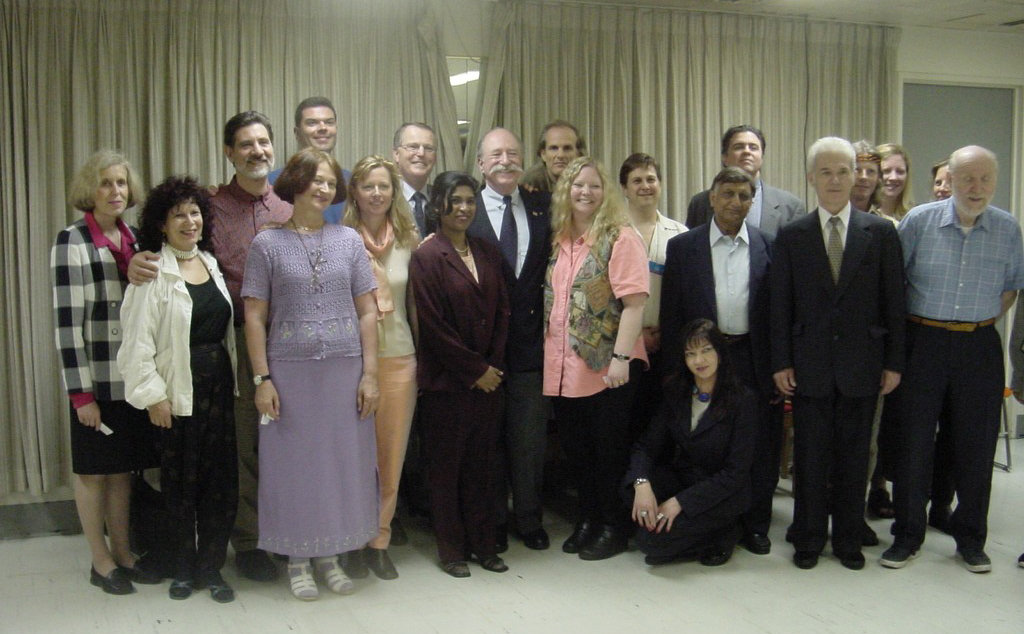 Beloved one of God,

Friday, 7 June 2002, from 1:15 to 2:30 p.m. in the Clubroom GA-37 of the Visitor’s Lobby at the United Nations building on First Avenue and 46th Street, the UNSRC Enlightenment Society welcomed Hakim Sauluddin for a presentation on “The Sufi Heart of Love, Harmony and Beauty.”

We had a great turn out of people who are employees of the United Nations and some guests from the community at large in New York City. Of course many nations, races, religions and spiritual schools were represented with an even split among gender. Some local Ruhaniat mureeds showed up including Shihana who works at the United Nations, Lisa Renée and Deirdre. Saul was accompanied by his wife Ananda.

Hakim Sauluddin’s talk focus was healing and the transmission of the heart energy of his lineage. He led us into the invocation “Towards the One”, introduced Sufism, and inspired with Sufi stories, practices and walk.

Saul started by giving some great historical background on the origin of Sufism from the perspective that illuminated beings have always been in the mystical schools forever and that they found another home under Islam. He went over the history of the first Sufis, the Sufis in India during the time of Pir O Murshid Hazrat Inayat Khan and finally Sufism in America with Sufi Ahmed Murad Chisti. He led the group in a short Zikar repeating Allah. He told many stories in the great Sufi tradition as Saul excels at doing, including the story of how Sam met his Hindu teacher in San Francisco. He placed appropriately the accent on the universality of the Sufis and how Hazrat Inayat Khan reconciled tradition and modernism.

Through his stories, he gave some teaching on what differentiates Sufism from sects that wants its student to” become like the leader” and that a true spiritual school wants people to unfold their potentialities. He emphasized that if people can leave with only one thing it is that God is their lover not their jailer.

The greatest moment was the practice on the breath that lead us to breathe the small, big, loud, gentle, loving and finally peaceful breath, through the heart and the breath. Peace was sent to the room, the building of the United Nations and to the world. What a wonderful practice to share from that center.

He concluded by the Quan Yin walk of compassion and mercy. All the people got up and participated in it.

Many people stayed around asking questions.

Thank you Saul, Shihana and the wonderful staff of the United Nations Enlightenment Society that made all this possible.